skip to main | skip to sidebar

Halloween festivities, as I remember them, were never quite as joyous when the holiday fell on a school night.
Friday night was the best night for trick-or-treating, of course, because you got the holiday plus a full weekend afterward. Saturday night ran a close second. I remember being in sixth grade and talking with a friend on the school playground a day or two before Halloween, which in 1987 was on a Saturday. I joked to my friend that I might eat so much candy on Halloween night that I'd be too sick to go to church the next morning. We both laughed about it, but when the time came I didn't end up gorging myself on candy.
This year Halloween is on Monday. While the rest of the week will undoubtedly be a letdown, most young students will be thrilled that much of the schoolwork they'd normally be doing that day will get pushed to Tuesday. Instead of students trudging into school wearing the glum expressions typical of Monday mornings, a host of superheroes, ghouls, cowboys, princesses, and unidentifiable creatures will light up the hallways with exuberance. Teachers will line them up for costume parades, and treat them to cookies, candies, and other sugary delights.
My sister shared with me a fabulous video from Video Dotti's YouTube channel. It's a home movie shot at Sandburg Elementary School in Centennial, Colorado, on October 31, 1989. I've rarely seen such a glorious parade of costumes.
Most of the 1980s favorites are there, often multiple times: The Noid, Freddy Krueger (or sometimes just a Freddy glove randomly included on another character), the Karate Kid, Jason from Friday the 13th, Pee-Wee Herman, Ghostbusters, Batman, and more. My favorite may be the floppy E.T. costume seen a couple minutes into the video. 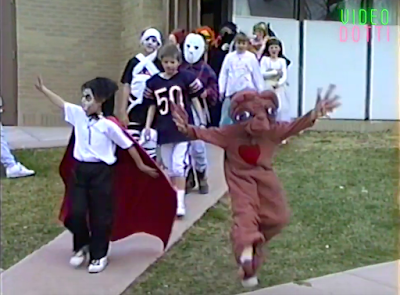 It doesn't take long to notice how much looser the times were, considering the types of costumes and accessories that were acceptable then. The camouflage-clad, rifle-toting Frankenstein wouldn't fly nowadays. Nor would the disfigured, scythe-wielding ghoul. 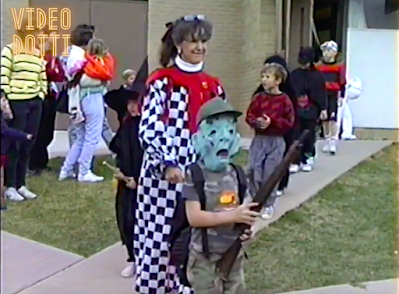 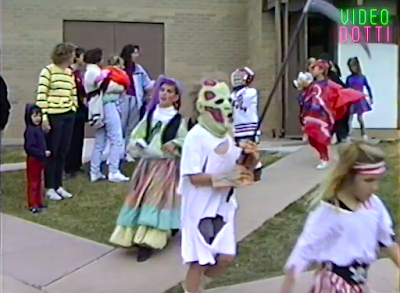 I'm guessing at least half of the costumes shown in the video would now be prohibited due to weapons, gore, full-face masks, and costumes that restrict movement. From a quick search online for school Halloween costume guidelines, I learned that some schools now even limit the amount of face paint that students can apply.
Another thing evident in the video is the teachers back then knew how to make the holidays fun. Check out this classic classroom decor, particularly its Halloween-themed bulletin board. 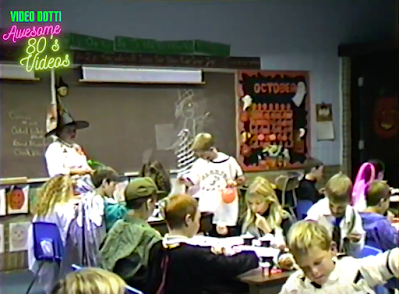 Teachers also knew how to party, especially if "party" meant supplying plenty of sugar in the form of candy apples, cookies for decorating, gummy worms, other individually-wrapped candies, and a smoking cauldron of Halloween punch. Oh, to be a school kid at Halloween! 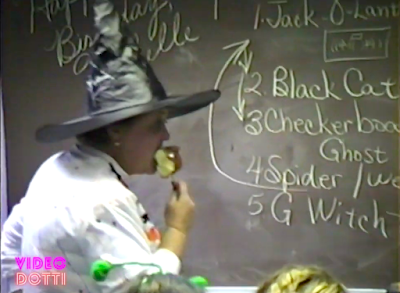 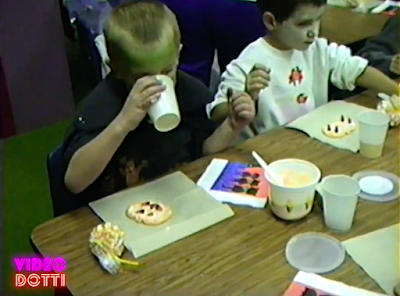 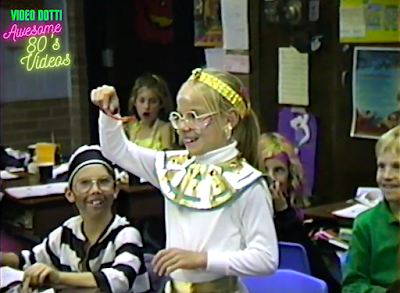 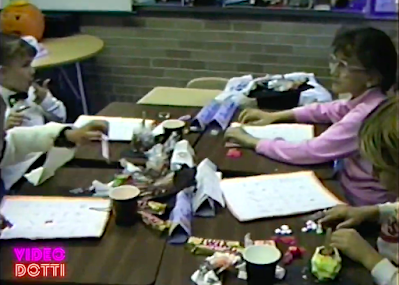 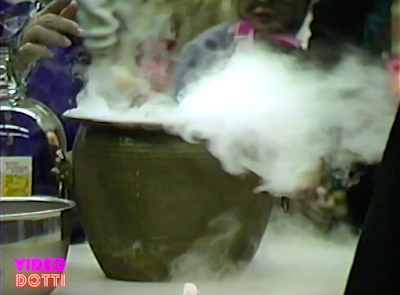 When I was young, filling treat bags was an important part of Halloween preparations. Our house sat at the closed end of a suburban cul-de-sac, and typically several dozen trick-or-treaters stopped there each year. To make candy distribution easier, Mom got in the habit of buying treat bags and filling them on the dining room table a day or two before Halloween, making sure to distribute the various candies equally. When she ran out of the fancy treat bags, she used plain brown paper ones and put stickers on them. 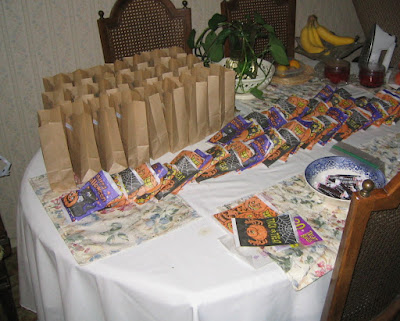 In my younger years I was mostly focused on assembling my costume and satiating my lust for sugar, and paid little attention to the treat bags except for not wanting Mom to give away all the good candy. Now I can very much appreciate the care she took in preparing treats for the children who would come to our door. And I think back fondly to how the small foyer in our house looked on Halloween night, with a basket of bags positioned next to the front door, additional bags set under a nearby table lamp, and a few festive knickknacks on display. 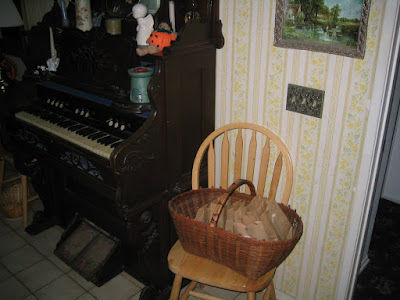 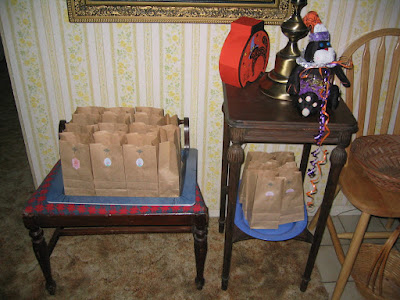 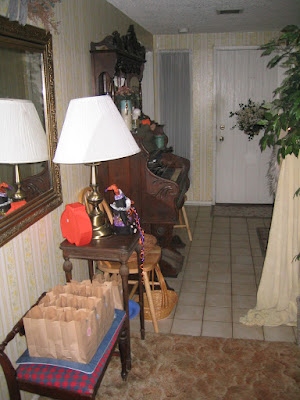 Because my most recent memories of trick-or-treating were as an adolescent who was old enough to do so without his parents, I don't have many clear memories of Mom and Dad accompanying my siblings and me around the neighborhood. But I suspect that for at least some of those years, Mom took us trick-or-treating while Dad stayed home and handed out the candy.
There is an impalpable comfort in knowing that Dad is back at home, probably on the couch watching a holiday program (or, more likely, the evening news), waiting for knocks at the door to beckon him to the treat basket. 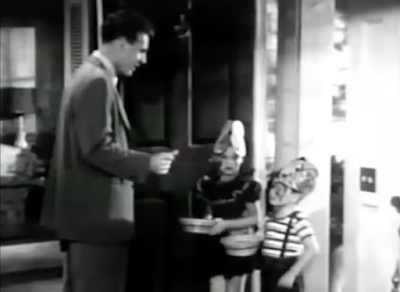 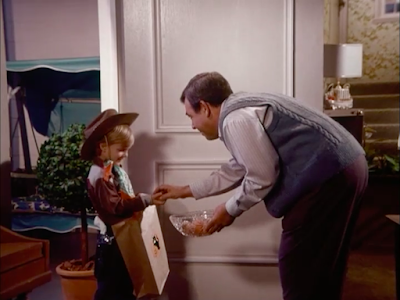 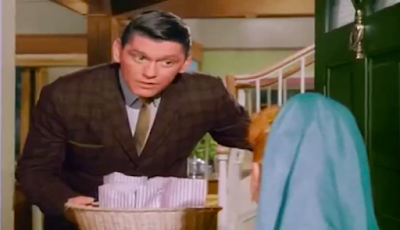 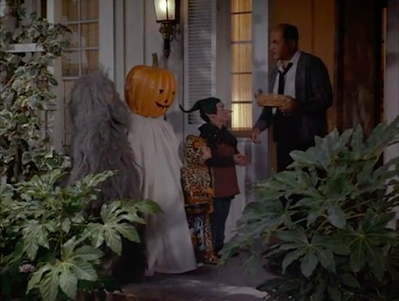 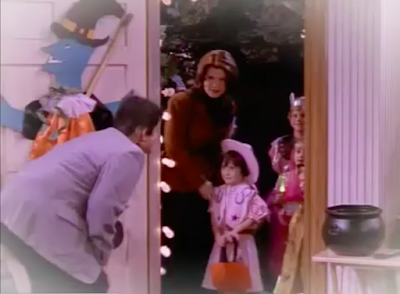 With October here and the promise of another Halloween, I decided to revisit this 13-year-old blog after a long hiatus. Family and work priorities prevent me from giving the site much attention during the year, but the site deserves to remain active. This week I checked old posts and, when possible, updated video links to replace dead ones. I hope to add new posts in the coming weeks.

I originally created Ghosts of Halloweens Past as a way to celebrate my childhood memories of the holiday, by sharing Halloween shows and programs that I remembered from those decades—along with fun and interesting videos that I discovered in more recent years of scouring the Internet. 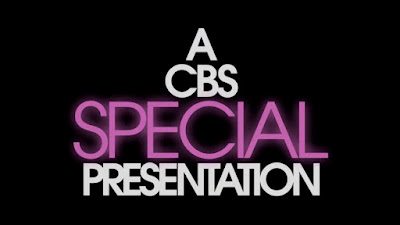 But it occurred to me that despite its good intentions, this blog is by its very nature somewhat antithetical to my childhood experiences of Halloween. Having been born in the mid-1970s, I grew up in a time when holiday entertainment was more communal. Halloween specials were typically shown only once a year, and network TV stations advertised them accordingly. Catching the annual airing of It's the Great Pumpkin, Charlie Brown, for example, was a much-anticipated event. As my sister pointed out to me in a recent conversation, part of what made these programs special was knowing that all your friends were watching them at the same moment. And even though we could pop a videotape into the VCR and record the program for later viewing, or eventually purchase an official VHS or DVD of it, a recording never did justice to the actual broadcast, because the communal event had passed. Watching the program whenever we desired meant that the shared experience rarely extended beyond the walls of our living room.

Today such experiences are even more individualized and fragmented. Halloween fans now have the choice of innumerable sites offering holiday fare—Ghosts of Halloweens Past being one of the humbler ones. Meanwhile, it's not yet clear whether It's the Great Pumpkin will be shown on PBS Kids or any other cable TV station this year.

On the flip side, sites like YouTube allow us the privilege of discovering obscure shows—sometimes including commercials from the original broadcasts—which never benefitted from repeat airings or commercial releases. Communal or not, such sites make it possible to re-experience programs that otherwise might have only existed as a strange memory—such as the "haunted Toys-R-Us" episode of That's Incredible from 1978, or The Search for Houdini, probably the most unusual Halloween program aired in 1987.

Thankfully, TV entertainment is only one part of a holiday that is still very much a communal event, at least in my neighborhood. Costumed children and their families will be seen along the sidewalks, and walking up to houses they otherwise never visit, and speaking to people with whom they otherwise never chat. And despite the potential for glorifying darkness and evil on Halloween night, in my experience the holiday can still bring out the best in humanity.

Here's to a wonderful Halloween 2022! 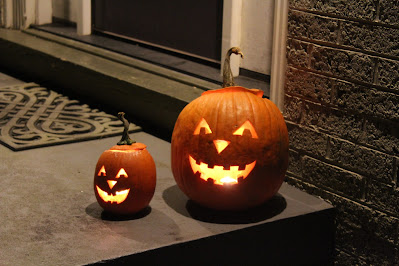 Witch Hazel's house serves as the centerpiece of this Halloween anthology, comprised of nine Looney Tunes cartoons plus some new transitional segments. (Quality is obviously lacking in the newer material.) Although I was too young to catch this special when it originally aired on October 26, 1977, I grew familiar with most of these individual cartoons from watching the Bugs Bunny/Roadrunner Show in the 1980s.
Posted by Paul B. at 4:18 PM No comments:

When Professor Tuttle is kidnapped from the Museum of Ancient History, museum directors hire three detectives (Moe, Larry, and Curly) to track him down and retrieve a stolen mummy. While in Cairo, the detectives inadvertently stumble into the kidnappers' lair inside the tomb of King Rootin-Tootin. Despite encountering skeletons, mummies, and crocodiles, the detectives manage to outwit the thieves, rescue the professor, and find the valuable artifact. Originally released in February 1939.
Posted by Paul B. at 4:05 PM No comments:

I've updated some of the video links that had disappeared from YouTube or other sites.  Despite not being able to post regularly on this blog like I used to, I know many people still enjoy looking at the old posts, and I want to at least keep the old links active.  I hope this blog helps you get your fill of Halloween throughout the year.  Thanks for visiting!
Posted by Paul B. at 4:25 PM No comments:

CONTROL agents are being found murdered with mysterious puncture marks on their necks, leading to speculation that they are being killed by a vampire. The murders are only committed on weekends and the papers speculate that a "weekend vampire" is behind them. The investigation leads Max and 99 to the spooky castle of Dr. Drago. Drago is a disgruntled former CONTROL scientist, who was dismissed for "unauthorized experiments." Max and 99 disguise themselves as newlyweds to get into the house and discover the secret of Drago's coffin. (Synopsis from wouldyoubelieve.com) Originally aired December 18, 1965.

Visitors to this site

Other links of interest